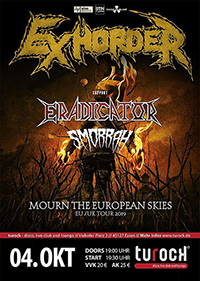 From now on you can choose two different options for international shipping. There is tracked and un-tracked shipping available for all European and worldwide orders at our shop. If un-tracked shipping is chosen by you we unfortunately do not take over costs when packeges get lost.

Pricing for options are as follows: 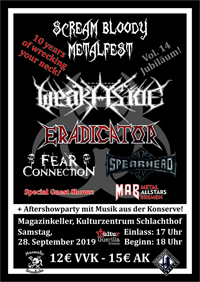 We will return to Bremen in September this year! We're looking forward to wreck the SCREAM BLOODY METALFEST at Magazinkeller Kulturzentrum Schlachthof. It's the 10th Anniversary edition which means it's kind of special! The line up can be seen in the banner on the left! 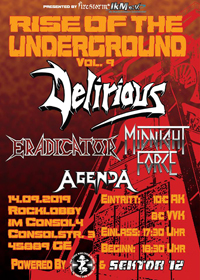 After 15 year of band history we finally have the honor to thrash the great football town of GELSENKIRCHEN! We are more than excited and are going to deliver well at “Rise Of The Underground Vol. 9”.

We are fortunate enough to share the stage with our buddies in DELIRIOUS from Hamm, MIDNIGHT FORCE and AGENDA the evening of September, 14th. All further information can be seen on the flyer to the left! 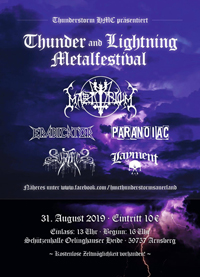 Arnsberg was like a second musical home base for us! It all began with 2006's Sauerland Rock Awards, various shows at Winternachtstraum Festival, the Metal bar Rock It and Breaking The Silence Festival in 2017, to name just a few. We want and will tie in with this tradition and create some fine future memories at Thunder And Lightning Festival.

Also participating in this event are our good friends in Layment who supported us on numerous metal feasts in the past.

The party will take place on 31st of August! 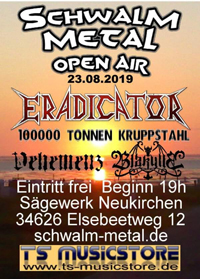 Our parents said at summer time you have to drink enough and to go outside in the fresh air. As headliner of Schwalm Metal Open Air we will combine this two tasks and our mission is to make you sweat even if the sun already went down! Be there on August 23rd and thrash with us and the other bands!